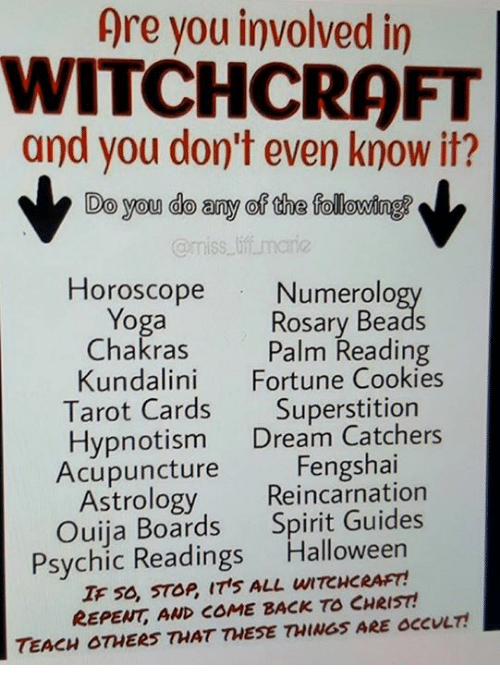 There is a meme floating around Facebook titled, "Are you involved in Witchcraft and you don't even know it?" It gives a list of activities that are purported to be part of "witchcraft."

I found this rather disingenuous as Christianity is all about witchcraft. Right up there in witchcraft is the practice of calling upon deceased people to intervene in the affairs of the living. How many people call on Jesus to change the world around them?

Let's us remember that Jesus was found by three Wise Men who practiced astrology and who followed the Star in the East to find him.

In Revelations there is the superstition concerning the number 666 which nearly all Christians tremble before. When they see the number 666 in their social security number, on a dollar bill, or as their street address they feel it is a bad omen. Numerology plays a significant part in Christianity as the number of the beast (and many other fantastical tales).

If the giving of prophecies to individuals and nations by Jesus and his apostles isn't a psychic reading, what is it?

As for spirit guides, there are Jesus, the angels, and the Holy Spirit, which are all spirits and which all Christians appeal to as guides. And then, of course, there is God. Take away the spirit guides, and then there will no longer be a Christian religion.

Tarot Cards were invented by the Knight's Templar (Christian soldiers). Many Christians, Jews, and Muslims were, and still are, heavily invested in the practices of magic, divination, astrology, dreams, hypnotism, palm readings, and numerology as a part of their religions.

The Catholic Church uses rosary beads in their rituals. Catholics were Christians long before Protestants arrived on the scene.

Chakras, yoga, kundalini, fortune cookies, and dream catchers are practices from other cultures that have nothing to do with witchcraft, Paganism, or Christianity.

As for Feng Shui (misspelled in the meme), you can see Feng Shui practiced throughout the Bible. Feng Shui is the art of placement such that the placement provides both a symbolic and real benefit. The arrangement of the Tabernacle, and ultimately, the arrangement of all churches throughout the ages was determined by principles similar to Feng Shui. The altar is always at the center, the leader of the congregation stands either symbolically or literally in the East, and there are ante-rooms placed in the west for the preparation of initiates. The details for arranging the Tabernacles are explained thoroughly in the Bible. Modern churches do not adhere as strongly to the Feng Shui of the placement of the Tabernacle, but it was a thousands years old practice that was in widespread use all the way up to the 1800s.

Then there are the Christian practices of speaking in tongues, the symbolically eating of Christ's flesh and drinking his blood, celebrating the Winter Solstice (Christ was actually born around September), and celebrating the rebirth of Spring (Pagan practice of Easter). In many Christian traditions, the celebrations of the Saint John of Jerusalem and Saint John the Baptist occur just after the longest and shortest days of the year, another Pagan practice.

A Course in Miracles